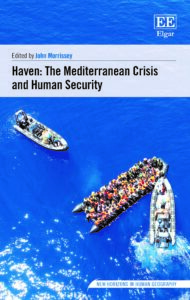 Whitaker Institute member Dr John Morrissey (Geography) has published his fifth book, Haven (Edward Elgar 2020), which presents a transformative understanding of security in responding to the Mediterranean refugee crisis by drawing critically on the UN concept of ‘human security’. The book was supported by the Academic Council on the United Nations System, an NUI Publications Prize and an NUIG Grant-in-Aid Award. From a range of Arts, Humanities and Social Science disciplines, and through case studies incorporating key governmental, NGO and refugee perspectives, the book critiques the major geopolitical, economic and social issues of the crisis. It documents the prioritisation of population management techniques that are underpinned by conventional territorial logics of security, before considering the alternative priorities of human security that can facilitate an active human rights framework and a more holistic and humanitarian interventionism. In advancing a human security approach to the crisis, the book interrogates the human consequences of conflict and displacement, challenges the impoverished thinking of statist security agendas that divide the world into zones of sanctuary and abandonment, and reflects critically upon our interconnected global sense of precarity, particularly so in our COVID-19 world.

“Haven was inspired by 3-year-old Alan Kurdi’s tragic drowning in September of 2015. I was deeply affected by the photographs of his little body washed up and hauntingly alone on a Turkish beach. The book is dedicated to all those who have died in the Med over the last 5 years, and dedicated too to a determined calling out of our responsibility in Europe to safeguard human rights and human security for all. My thanks to the wonderful colleagues and graduate students who fed so inspiringly into an IRC project I received funding for in 2016. The book is a culmination of that project, and the contributions, which come from leading international writers, Irish Navy personnel, students and activists alike, reflect a deep empathy and concern for solidarity in an interconnected world – a world whose precarities have become even more acute and visible since the outbreak of COVID-19”.

“With adroit editorial leadership, John Morrissey and the contributors take us on an intellectual journey. They convey vividly what is at stake for those enduring inhumane security. As they sweep through and with the crisis affecting the Mediterranean, it feels all the more poignant as the migration crisis is co-joined with the Covid-19 pandemic. Both have been described as “invisible” and yet the consequences for human security are far from invisible.” – Klaus Dodds, Royal Holloway, University of London, UK

“Can the framework of human security be reconstituted to provide an ethical grounding for international politics? The chapters in this volume grapple with this question as they incisively critique the Global North’s response to the so-called “refugee crisis”, and consider what kinds of conceptional and institutional changes are necessary to prioritize solidarity over securitization.” – Emily Gilbert, University of Toronto, Canada

“Can human security be salvaged from the violence, exclusions, and cruelties created by the geopolitics of humanitarianism? Haven suggests that it can, offering important insights into opportunities for developing geosocial solidarity with refugees with safer forms of space-making and human rights work. But it does so without succumbing to siren songs about safety and pity that perform protection and care in damaging and uncaring ways. It thereby reminds us that while the “Mediterranean Crisis” is most definitely a crisis of human insecurity, it remains a crisis created by exclusionary approaches to security as much as by war, disease and human vulnerability. A call to ongoing critical thinking about what might make “safe space” safe for all, it brings together well-informed interdisciplinary arguments about the human geographies of human rights that human security urgently needs.” – Matt Sparke, University of California, Santa Cruz, US

Dr John Morrissey is a Senior Lecturer in Geography, Programme Director of the MA in Environment, Society and Development, and Associate Director of the Moore Institute for Humanities at NUI Galway. John has published widely in the areas of geopolitics, security and international development. His other books include Negotiating Colonialism (Royal Geographical Society 2003), Key Concepts in Historical Geography (Sage 2014),  Spatial Justice and the Irish Crisis (Royal Irish Academy 2014) and The Long War (University of Georgia Press 2017). His research has been supported by various grants, from the British Academy and Clinton Institute for American Studies, to the ESRC and IRC, and in recent years he has held prestigious visiting fellowships at CUNY, Virginia Tech, the University of Cambridge, the University of Oxford and Australian National University.

The book has also been featured in an article by Galway Daily. Click here to read more.