Traditionally, local governments fund recurring expenditures from three broad sources, namely user fees and charges, local taxes and grants or transfers.  Although reform of local government funding is a never-ending process, since the 2008 financial crisis Ireland has witnessed an unusually large number of changes in the funding of Irish local councils. These are a new local property tax (LPT), commercial rates harmonisation and revaluations, abolition of general purpose grants and a new equalisation fund to finance designated transfers for the purposes of reducing fiscal disparities between local authorities. Together, these have resulted in a reduction in the vertical and horizontal fiscal imbalances in the Irish local government system.

www.localauthorityfinances.com is an interactive website on the public finances of the 31 local authorities. Winner of the 2014 WA and the 2015 World Summit Award, the online platform aims at increasing awareness of how taxpayers’ money is spent locally by providing cross-council data on local authority spending and income, disaggregated by expenditure function and income source. Users of the site can view the budget of their respective council (and all other councils), the amount (in total, per person, or percent) of revenue raised and where the money is spent, in terms of the local services rendered. This information is of interest to a number of different stakeholders, including policymakers, politicians, researchers and above all, communities, taxpayers and citizens. We have now updated the website to include performance measurement, and more specifically, a framework that measures the financial performance of local authorities using financial indicators and ratios under four specific headings, namely, liquidity, operating performance, collection rates and solvency. 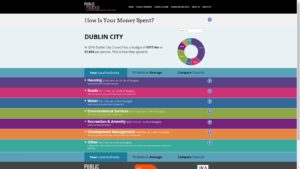