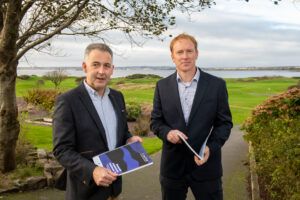 Mr. Diarmuid Kelly, Chairperson of Cuan Beo and Prof Stephen Hynes at the launch of Cuan Beo’s report on the Economic Assessment of the Marine Resources of South East Galway Bay Catchment

Cuan Beo, a community based coastal organisation working in South East Galway Bay,  published a report ‘An Economic Assessment of the Marine Resources of the South-East Galway Bay Catchment’ on Friday 19th November. The report highlights the importance of the marine resource of South East Galway Bay. It was launched at a regional event held on Friday the 19th of November at the Galway Bay Golf Resort, Oranmore. The event was attended by local politicians and policy makers, representatives of State agencies together with those working and living in the coastal catchment including farmers and fishermen, community groups, tourism and recreation groups, scientists, environmental groups and those who rely on the sea and the coastal natural resources of South East Galway Bay for a living.