Reconstructing the Economy of Ukraine 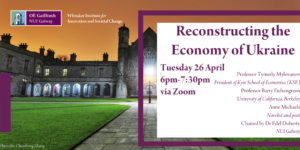 The scale of the human and economic devastation in Ukraine is staggering. Thousands of civilians have been killed; millions of people have been displaced, including around 5 million people who have been forced to leave Ukraine. The basic inputs of any economy and society – factories, offices, transport infrastructure, schools, universities and healthcare facilities – have all been severely affected. The total economic cost of the war is very likely to be hundreds of billions of euros.

The Whitaker Institute & the J.E. Cairnes School of Business and Economics at NUI Galway are honoured to host an online event on Reconstructing the Economy of Ukraine at 6.00 p.m. (Irish time) on April 26. The event is free but registration is required.

The main speaker is Professor Tymofiy Mylovanov. Professor Mylovanov is the President of Kyiv School of Economics (KSE) and Associate Professor of Economics at the University of Pittsburgh. He served as Minister of Economic Development, Trade, and Agriculture in Ukraine from 2019 to 2020.

We will also be joined by Professor Barry Eichengreen. Professor Eichengreen is the George C. Pardee & Helen N. Pardee Chair and Distinguished Professor of Economics and Political Science at the University of California, Berkeley. He is a fellow of the American Academy of Arts and Sciences. He has served as a Senior Policy Advisor to the International Monetary Fund.

Reconstructing the economy of Ukraine will be a long challenging process. Reconstructing the broken hearts and spirits of everybody affected by this dreadful war will take even longer. We are very honoured to be also joined by the distinguished Canadian novelist and poet, Anne Michaels. Anne’s great novel, Fugitive Pieces, brilliantly and poignantly explores the enduring impact of war, an impact summarised in her line that ‘there is nothing a man will not do to one another, nothing that a man will not do for another’.

The event will be chaired by Dr Edel Doherty. For further information, please contact the event organiser, Brendan Kennelly, at brendan.kennelly@nuigalway.ie

His research on game theory, contract theory, and institutional design has been published in major international academic journals such as American Economic Review, Econometrica, American Economic Journal: Microeconomics, Review of Economic Studies, and the Journal of Economic Theory. Mylovanov is a co-founder of VoxUkraine, a group of global economists working on policy problems in Ukraine.

Barry Eichengreen is the George C. Pardee & Helen N. Pardee Chair and Distinguished Professor of Economics and Political Science at the University of California, Berkeley, where he has taught since 1987. He is a CEPR Research Fellow, and a fellow of the American Academy of Arts and Sciences, and the convener of the Bellagio Group of academics and economic officials. In 1997-1998, he was Senior Policy Advisor at the International Monetary Fund. He was awarded the Economic History Association’s Jonathan R.T. Hughes Prize for Excellence in Teaching in 2002 and the University of California at Berkeley Social Science Division’s Distinguished Teaching Award in 2004. He is also the recipient of a doctor honoris causa from the American University in Paris. His research interests are broad-ranging, and include exchange rates and capital flows, the gold standard and the Great Depression; European economics, Asian integration and development with a focus on exchange rates and financial markets, the impact of China on the international economic and financial system, and IMF policy, past, present and future. 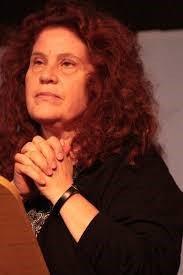 Anne Michaels is a novelist and poet. Her books have been translated into more than forty-five languages and have won dozens of international awards, including the Orange Prize, the Guardian Fiction Prize, the Lannan Award for Fiction and the Commonwealth Poetry Prize for the Americas. She is the recipient of honorary degrees, the Guggenhem Fellowship and many other honours. She has been shortlisted for the Governor-General’s Award, the Griffin Poetry Prize, twice shortlisted for the Giller Prize and twice shortlisted for the IMPAC Award. Her novel, Fugitive Pieces, was adapted as a feature film. From 2015 to 2019, she was Toronto’s Poet Laureate.

She is currently completing a new novel and has recently released All We Saw, a new book of poetry, and Infinite Gradation, a new book of non-fiction.

Edel Doherty is a lecturer in Economics at the J.E. Cairnes School of Business and Economics and she is a member of the Health Economics & Policy Analysis Centre (HEPAC). Her research is focused on the application of discrete choice experiments, economic evaluation and econometrics in Health and Environmental Economics. She has published across a range of areas and she is particularly interested in exploring the socio-economic drivers of health, health inequalities and preferences for health and healthcare. Her work to date has been published in a number of leading international peer-reviewed journals such as Social Science and Medicine, the Journal of Economic Behaviour and Organisation, Health Affairs, Economics and Human Biology, European Review of Agricultural Economics and the Journal of Agricultural Economics.  Since joining NUI Galway Edel has participated in a number of successful European and National research funding applications to the value of over €3.5 million euro. Previously Edel worked at Queen’s University Belfast and she was a visiting scholar to the UC Berkeley in 2009 and Simon Fraser University in 2019.