Negotiating Intercultural engagement in Ireland: Irish immigration policy and its impact on the day-to-day lives of migrants 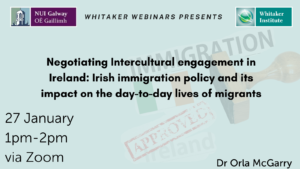 Interculturalism has become the dominant migration policy in Europe over the past two decades. In contrast with past policies of multiculturalism which are often seen as having created ‘parallel societies’, policy makers have embraced interculturalism as an approach that valorises ‘interaction’ across cultural frontiers. Interculturalism however, carries a dense and contested rhetorical baggage that is in need of distillation. Drawing on empirical research across multiple sites, this seminar provides a critical discussion of Ireland’s intercultural policy. It argues that the laissez faire nature of Ireland’s migration policies entrench inequalities among contemporary migrants and calls for more cohesion and cooperation between migrant advocacy groups, academics and policy stakeholders.