Climate Change and the Financial System

The 2019 Monsignor Pádraig de Brún Memorial Lecture, entitled Climate Change and the Financial System, will address the implications of climate change for the Irish financial system. All sectors will be affected by climate change, whether through exposure to weather-related shocks or the economy-wide transition to low-carbon means of production and consumption. These structural changes will require considerable investment by households, firms and the government to retrofit buildings and switch to low-carbon production techniques and transportation methods.

The funding of this investment is just one of the challenges facing the financial system. In addition, it must cope with carbon-related market risks and credit risks, a reduction in the insurability of climate-vulnerable regions and activities and the tail risks of macroeconomic and financial instability. Given the scope and severity of these risks, addressing climate change is now high on the policy agendas of the central banking and regulatory communities. Accordingly, this lecture will outline the climate-related work agenda facing the Central Bank of Ireland.

The biennial public lecture is held in honour of Monsignor de Brún who served as University President from 1945 until 1959. The memorial lectures have been running since the 1960’s with Professor Stephen Hawking giving a lecture in 1994 on “Life in the Universe”. 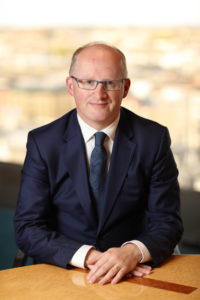 During 1997-2015, he was on the academic staff at Trinity College Dublin and he remains affiliated with the university as Whately Professor of Political Economy (on leave). Prior to joining the Central Bank, he also chaired the Advisory Scientific Committee of the ESRB and was Director of the International Macroeconomics and Finance Programme at the Centre for Economic Policy Research (CEPR).

After his undergraduate education at Trinity College Dublin, he received his PhD in Economics from Harvard University in 1995 and was Assistant Professor of Economics and International Affairs at Columbia University during 1995-1997 before returning to Dublin.

In 2001, he was the inaugural recipient of the German Bernacer Award in Monetary Economics for outstanding contributions to European monetary economics; in 2010, he was co-recipient of the Bhagwati Prize from the Journal of International Economics. He has also acted as an academic consultant for the ECB, European Commission, International Monetary Fund, World Bank, OECD, Asian Development Bank and a number of national central banks. He is a former managing editor of Economic Policy.