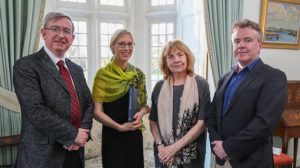 Professor Kate Kenny, Whitaker cluster leader of Work, Organizations and Society,  has just launched her new book, Whistleblowing: Toward a New Theory (Harvard University Press). An introduction to the book is provided by Dr Tom Clonan and Professor Ricca Edmondson.

Despite their substantial contribution to society, whistleblowers are considered martyrs more than heroes. When people expose serious wrongdoing in their organizations, they are often punished or ignored. Many end up isolated by colleagues, their professional careers destroyed.

The financial industry, rife with scandals, is the focus of Professor Kate Kenny’s penetrating global study. Introducing whistleblowers from the United States, the United Kingdom, Switzerland, and Ireland working at companies like Wachovia, Halifax Bank of Scotland, and Countrywide–Bank of America, Whistleblowing suggests practices that would make it less perilous to hold the powerful to account and would leave us all better off.

Professor Kenny interviewed the men and women who reported unethical and illegal conduct at major corporations in the run up to the 2008 financial crisis. Using the concept of affective recognition to explain how the norms at work powerfully influence understandings of right and wrong, she reframes whistleblowing as a collective phenomenon, not just a personal choice but a vital public service.

A number of people were interviewed for the book in relation to their whistleblowing experiences. Paul Moore worked for HBOS bank in the UK when he challenged a problematic sales culture within the organization; Eileen Foster was an executive vice president at Countrywide until she reported systemic home loan fraud; Olivia Greene disclosed wrongdoing in defense of a colleague at Irish Nationwide Building Society; and UK and US whistleblower, Martin Woods reported a series of money-laundering activities at Wachovia Bank.

Speaking about the book, Professor Kate Kenny from NUI Galway, commented: “Genuine whistleblowers are often poorly served and supported by society. I wanted to explore why this is so. Through hearing those who have spoken out, we might begin to re-frame accepted attitudes towards whistleblowers.”

Kate Kenny is Professor of Business and Society at NUI Galway. Her work focuses on organisations and particularly on how they affect our daily lives as employees and as citizens. Her aim is to see whether new and innovative theories emerging in the field of organization studies might contribute to these questions.

Dr Tom Clonan served as an Irish Army Officer from 1989 to 2000. Dr Clonan became one of Ireland’s most high-profile whistleblowers when his research on sexual violence in the Defence Forces led to a Government inquiry. Today he is also a campaigner for disability rights. He is currently a Security Analyst with The Irish Times, providing in-depth defence and military analysis of fast-moving international events. He also provides expert analysis to RTÉ television and radio, and international broadcasters including the BBC and Sky News.

Ricca Edmondson is Professor of Political Science and Sociology at NUI Galway. She is also a Visiting Professor at the University of Tampere, Finland, and Editor of the European Journal of Cultural and Political Sociology. Among other work, she is currently carrying out research with colleagues from the US and Canada into forms of motivation to wisdom and virtue.

The book launch was hosted by the Whitaker Institute and Management Discipline at NUI Galway.